Rhino Imaging provides the latest in technological support for all imaging and document management services.  They use a program called Concordance to manage documents provided to them by their customers.  While Concordance is good at what it does, there are certain limitations to the things it can do.

However, Concordance does have the ability to import and export data to and from its database.  This ability allowed MVI to write an application that would allow Rhino Imaging to export their data from Concordance, reorganize it using the MVI-built application, and then re-importing it.  This ability gave an advantage to Rhino Imaging in that they were the only ones in their industry which used Concordance that could organize their data in this customizable way;  the data coming out of Concordance as a series of specially formatted data files which were then read, parsed and interpreted by the MVI application.

Then the application re-organizes the data based on the settings input into it and generates similarly formatted data files which can then be re-imported into Concordance.  The MVI application itself is Windows-based, written in VB6 and has a GUI (Graphical User Interface) which allows Rhino Imaging to customize the way their data is re-organized.  This application has become part of their daily process and has helped them give their customers exactly what they need. 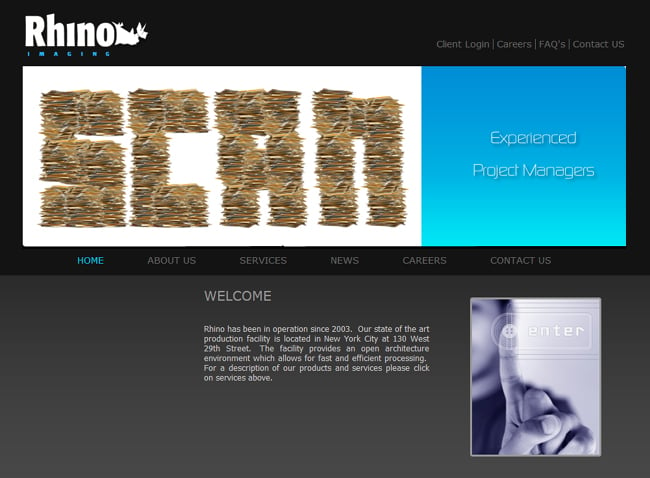 Active Server Pages (ASP) is a server-side scripting environment that you can use to create and run dynamic, interactive Web server applications.  With ASP, you can combine HTML pages, script commands, and COM components to create interactive Web pages or powerful Web-based applications, which are easy to develop and modify.

If you are an HTML author,  you will find that server-side scripts written in ASP are an easy way to begin creating more complex, real-world Web applications.  If you have ever wanted to store HTML form information in a database, personalize Web sites according to visitor preferences, or use different HTML features based on the browser, you will find that ASP provides a compelling solution. For example, previously, to process user input on the Web server you would have had to learn a language such as Perl or C to build a conventional Common Gateway Interface (CGI) application.

With ASP, however, you can collect HTML form information and pass it to a database using simple server-side scripts embedded directly in your HTML documents. If you are already familiar with scripting languages such as VBScript or JScript (JScript is the Microsoft implementation of the ECMA 262 language specification), you will have little trouble learning ASP.

If you develop back-end Web applications in a programming language, such as Visual Basic, C++, or Java, you will find ASP a flexible way to quickly create Web applications. Besides adding scripts to create an engaging HTML interface for your application, you can build your own COM components. You can encapsulate your application’s business logic into reusable modules that you can call from a script, from another component, or from another program.

A server-side script begins to run when a browser requests an .asp file from your Web server. Your Web server then calls ASP, which processes the requested file from top to bottom, executes any script commands, and sends a Web page to the browser.

Because your scripts run on the server rather than on the client, your Web server does all the work involved in generating the HTML pages sent to browsers. Server-side scripts cannot be readily copied because only the result of the script is returned to the browser. Users cannot view the script commands that created the page they are viewing.

Many people forget that ASP isn’t just for making dynamic HTML pages. ASP can be used to create pages of all kinds, or even binary data, like images. Some examples have used XML, audio play lists, text files, GIFs, and JPEGs – literally anything with a MIME type that he browser recognizes.

The code needed to make this happen is really quite simple. It takes only one line to change the HTTP header to produce a different MIME type, and thus force the web browser to interpret the file differently. One application for this ability is to create a stylesheet using ASP.